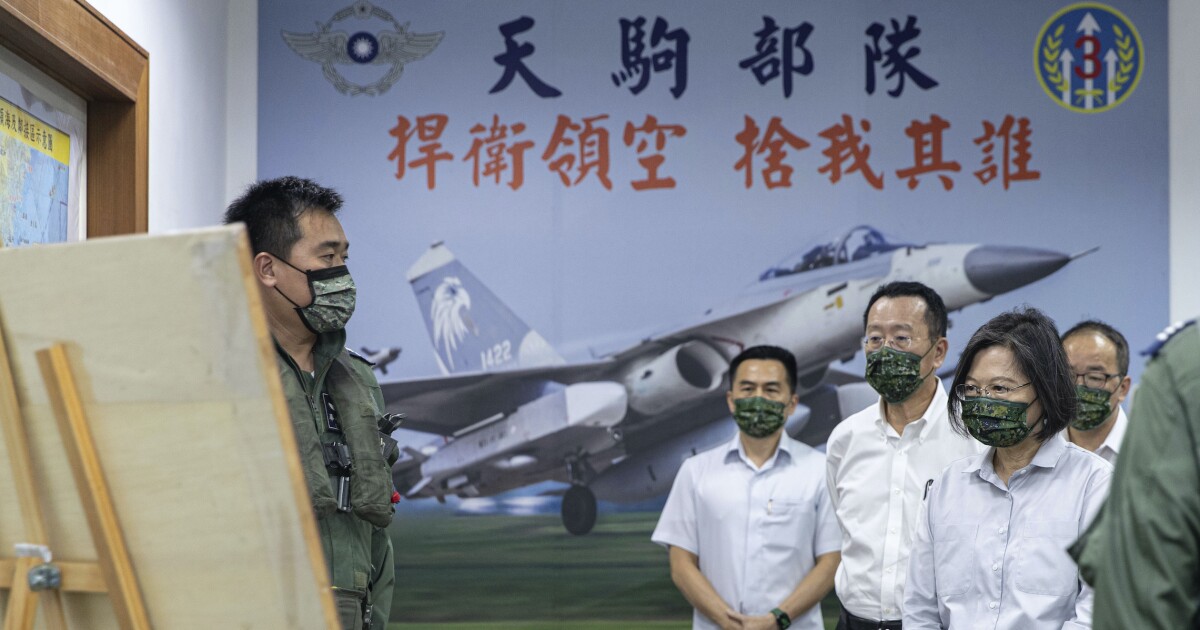 Xi may use force against Taiwan amid ‘internal challenges’, Taipei official says

“Obviously Xi Jinping is trying to be crowned for his third term and probably for life from there,” a senior Taiwan official said. “I think he also faces challenges from within. He basically breaks the pattern of the 10-year rule and [then a] change [of] leadership. So there is some resistance, from within, for him to become president of China or chairman of the party.

Nonetheless, Xi is expected to get a green light for his term extension at a Chinese Communist Party congress in October, an outcome that seems assured in part by weeding out potential rivals throughout his career. Its extraordinary success contrasts sharply with domestic frustration over China’s “zero-COVID” restrictions and the country’s apparent economic difficulties, with uncertain ramifications for the risk of war against Taiwan.

CHINA CAN PLAY FOR TAIWAN STRAIT BEFORE 2024 ELECTIONS, TAIWANESE PREDICTED

Chiu spoke to a group of journalists invited to Taipei as the government pushes for Taiwan’s membership of the Comprehensive and Progressive Agreement for Trans-Pacific Partnership, a free trade agreement linking 11 Pacific Rim economies. and the Americas. Taiwanese officials are reluctant to comment too specifically on Chinese communist domestic politics, but economic pressures and security risks remain linked on both sides of the Taiwan Strait.

“Deng Xiaoping and Hu Jintao achieved economic growth of over 9 percent and they only served two terms, but Xi Jinping is seeking the third term with his 3.8 percent economic growth this year,” Chiu said. referring to Xi’s predecessors. “So people would question him about his legitimacy. … Therefore, there will be stronger struggles and opposition within the CCP. Our assessment is that this will happen after March of next year.

The conversations took place amid expanded Chinese military activity around Taiwanese territory in the weeks following House Speaker Nancy Pelosi’s (D-CA) visit to the island democracy, culminating in Taiwan’s decision to shoot down an unmanned aerial vehicle (presumed to be a civilian drone linked to Beijing) that approached a Taiwanese-held island near the Chinese coast on Thursday.

“I would expect [China] will respond first with harsh rhetoric and then possibly some other type of asymmetric escalation, such as sending a military drone directly over one of Taiwan’s military installations,” said Jim Fanell, former Director of Intelligence for the United States Pacific Fleet. Told Voice of America. “In the most provocative case, the Chinese Communist Party might even order the PLA to send a military drone over Taipei.”

This week’s outings coincided with Tuesday’s announcement that the National Congress of the Communist Party of China will begin on Oct. 16. This summons, a once-in-a-five-year affair, will see party officials choose their leader for the next five years – a vote Xi is expected to win pro forma.

While Taiwanese officials agree that economic struggles will eventually exert political pressure on Xi, they can be found to offer differing assessments as to whether those economic factors could bolster or limit his will to use against Taiwan.

“Their financial problems are actually quite serious,” said the first senior Taiwanese official. “It could prevent them from engaging in a major military scenario.”

Still, Chiu, the deputy mainland affairs minister, cautioned against assuming that Xi will simply follow apolitical military advice in deciding whether now is the optimal time to launch an offensive.

“A bigger thing is China’s intention to annex Taiwan, and that’s a political issue,” he said. “They might want to use the annexation of Taiwan to solve their Xi Jinping legitimacy problem. … And besides, they have a frenzied nationalism in the country at the moment. Therefore, using Taiwan as a target is in line with their advantages. »

The other official touted President Joe Biden’s repeated statements that the US would defend Taiwan as a burden on Xi’s mind, especially in light of Russia’s struggles during the invasion of Ukraine. . “The PRC has to calculate very carefully, because this is also a breakthrough deal for China,” said the first senior Taiwanese official.

Chiu also argued that international shows of support for Taiwan could convince Xi that a military campaign is a greater risk to his regime than any domestic discontent.

CLICK HERE TO LEARN MORE ABOUT THE WASHINGTON EXAMINER

“We have to let China know that if they try to annex Taiwan, they will have to pay a very high price,” he said. “However, if the international community does not pay attention to the Taiwan Strait or offer support to Taiwan, Taiwan will face very high risks. The crisis may occur at any time, but we will do our best to delay time, and we hope it never happens.

When you see utilities in the news, it’s usually because their operating personnel are deploying to their territories…