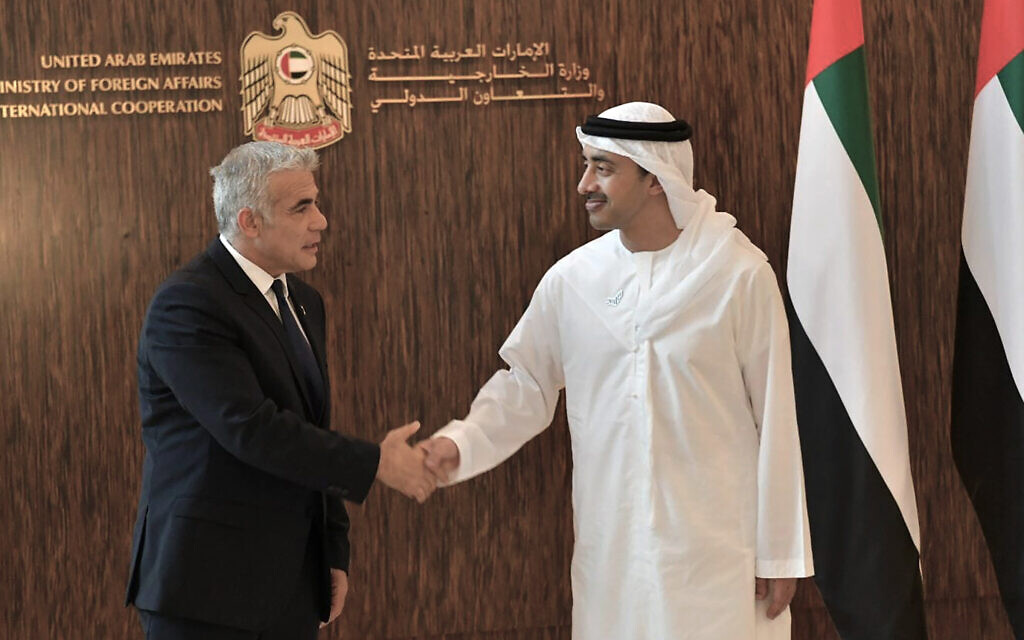 The UAE-Israel peace is more than an agreement. It’s a way of life.

The world expected our differences to define us. One of us is a Jew, the other a Muslim. One of us is Israeli, the other Arab. Not only have these characteristics shaped us as human beings, but they have also posed a lingering question: does the past determine the future, or is our fate in our hands?

Last week, with the very first official visit of a Israeli Minister in the United Arab Emirates and the opening of an Israeli embassy and consulate in the country, we have an opportunity to reflect on the response.

Basically, the UAE and Israel decided to do things differently with the signing of the Abraham’s historic accords in 2020. With the establishment of diplomatic relations between the United Arab Emirates and Israel, our two countries have decided to define a new paradigm for our region: that defined by the joint pursuit of peace, stability, security, prosperity and coexistence for our peoples. Our determination to achieve the Accords stems from our recognition that we share many of the same goals, especially in our commitment to fostering a better future for generations to come. If we have the opportunity to create a world of peace for them, we must not let this opportunity pass by.

Of course, the challenges ahead are significant. The peace our countries have chosen comes against a backdrop of outbreaks of violence and extremism in the region, where there are serious economic interests and complex diplomatic dynamics. Our approach, which prioritizes open exchangee and person-to-person engagement will have to overcome the forces that try to undermine it. However, we believe in the power of bold decision-making that puts the well-being of our people at the forefront, and we hope to continue to inspire others in the region to choose the path of peace.

[T]Two of the world’s most dynamic and advanced societies have started to create an interconnected and powerful engine of progress and opportunity, not only for the UAE and Israel, but for the region as a whole.

By registering, you accept the conditions

The benefits of forging lasting peace are clear. Since the establishment of relations between the UAE and Israel, economic growth, cultural exchanges and political cooperation between our countries have flourished.

We have been witnesses high level trade delegations exploring promising opportunities for trade and investment, particularly in the sectors of health, aviation, agriculture, education, telecommunications, energy, technology and tourism.

We have seen our countries collaborate closely on vaccine research and development as the United Arab Emirates and Israel have emerged as world leaders in the fight against the COVID-19 pandemic. Now ranking among the top countries with the highest vaccine delivery rates, the UAE and Israel are committed to sharing their knowledge and expertise with other countries as part of efforts to strengthen cooperation international campaign in the fight against COVID-19.

In addition, our two countries wish to share resources between them in areas such as digital transformation, smart cities, cybersecurity and artificial intelligence. Young people will benefit from the growth of these industries, which will improve social well-being, increase economic competitiveness and ensure that our countries are prepared for the future.

As part of the agreements, the United Arab Emirates, the United States and Israel also announced the Abraham Fund. Through this fund, the American International Development Finance Corporation, the United Arab Emirates and Israel will mobilize more than $ 3 billion in private sector-led investment and development initiatives to promote regional economic cooperation and prosperity. in the Middle East and beyond. In turn, the initiative will generate unprecedented opportunities for the peoples of the region.

Today, two of the world’s most dynamic and advanced societies have started to create a linked and powerful engine of progress and opportunity, not only for the UAE and Israel, but for the entire region.

This vision is a vision that we share and cherish. The peoples of the United Arab Emirates and Israel seek to live in a world of peace. In order to realize this vision, we must work hard to create opportunities for engagement and encourage others to join in these efforts. This pursuit can only be strengthened by multilateral cooperation between countries also invested in the choice of collaboration rather than confrontation.

If the Abrahamic accords were the first of their kind in our region, they represent a future which, in our opinion, must become commonplace: one where differences are set aside in favor of dialogue. As the momentum builds, we are reminded that sometimes the most impactful decisions are those that are deemed difficult, if not impossible.

We both want to live in a world where peace is possible. We have to work hard with our people and with each other. In order to achieve lasting and lasting solutions to the problems facing our region, we will continue to uphold the spirit of peace in all efforts to shape a better world for our children. Peace is not an agreement you sign – it is a way of life. The ceremonies we organized last week are not the end of the road. They are just the beginning.

In doing so, by deciding differently, we choose peace.

Sheikh Abdullah bin Zayed Al Nahyan is the Minister of Foreign Affairs and International Cooperation of the United Arab Emirates.

This article originally appeared in National news and is reproduced here with permission.

Are you serious. We appreciate this!

We are really glad you read X Times of Israel Articles in the past month.

That’s why we come to work every day – to provide discerning readers like you with must-see coverage of Israel and the Jewish world.

So now we have a request. Unlike other media, we have not set up a paywall. But since the journalism we do is expensive, we invite readers for whom The Times of Israel has become important to help support our work by joining The Times of Israel community.

For as little as $ 6 per month, you can help support our quality journalism while benefiting from The Times of Israel WITHOUT ADVERTISING, as well as access to exclusive content reserved for members of the Times of Israel community.

Already a member? Log in to no longer see this