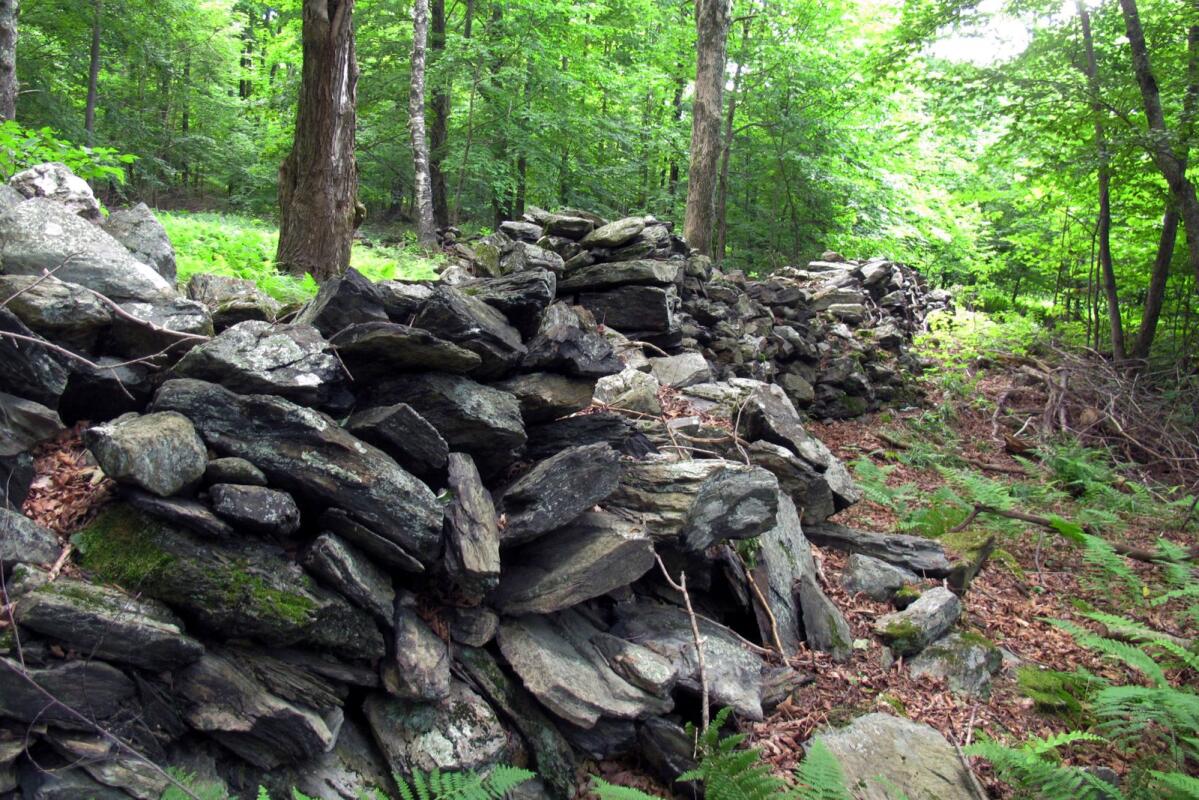 Shays’ Rebellion: Uprising at the Courthouse

In this photo from July 22, 2014, a rock wall sits in the forest on Egg Mountain in Sandgate, Vt. The area is known locally as Shays Settlement where Daniel Shays and some of his followers fled after the 1787 rebellion over economic policies in Massachusetts known as the Shays Rebellion. (AP Photo/Wilson Ring)

February 1 marked National Freedom Day. While the observance was created to commemorate the day in 1865 when President Lincoln upheld congressional legislation that became the 13th Amendment abolishing slavery, in this year 2022 as we recently passed the anniversary of the attack on the US Capitol, it seems appropriate to take a look at another chapter of American history that has also tested our pretense of equality and freedom.

After eight years of war to gain independence from the tyranny of the King of England, the fledgling Congress of the United Colonies, then known as the Continental Congress, struggled to survive as a cohesive federation.

The Constitution had yet to be written, there was no federal bank or economic system, and each state asserted its individual rights and trade policy over others. The main reason the states deferred to a federal or central system of power at the time was so that collectively sufficient funds and supplies could be found to provide weapons and soldiers to overthrow what the settlers considered as an occupation of their land. by the British armed forces.

This was resolved with the surrender of General Cornwallis to George Washington at Yorktown in 1781 and the signing of the Treaty of Paris two years later, but a revolution within the colonies was beginning to be brewing.

Most Continental Army soldiers were farmers who returned to their modest properties after the war. The Continental Congress had promised them compensation for their service, but the legislation lacked the proper authority to impose taxes, so much of the “vouchers” former soldiers had received in exchange for a subsequent salary yielded little or no income.

At the same time, each state, having the power through its legislatures to impose and enforce the collection of taxes, increased what its citizens had to pay. This was particularly the case in Massachusetts.

Farmers saw their land confiscated by creditors and even imprisoned as debtors for non-payment of trade debts or taxes. This, it was believed, was part of a conspiracy against them in which the government was guilty of fraud and not acting in the best interests of the people.

Daniel Shays, a retired soldier from the 5th Massachusetts Regiment in the Continental Army, had returned to his farm after serving in the Battle of Bunker Hill and had been threatened with seizure. Unable to secure satisfactory results from the state legislature, he organized a band of several hundred demonstrators in 1786 and stormed the Springfield County Courthouse, surrounding the judges and officials of the court, succeeding in halting government operations and temporarily suspending the charges against his fellow farmers.

Massachusetts Governor James Bowdoin called the incident an act of “insurrection” and a bill was passed by the state legislature exonerating any law enforcement official, civilian or military, if he were to injure or kill anyone involved in the uprising.

This only infuriated the militants, who then moved on to the Springfield Arsenal where state militia weapons and ammunition were manufactured and stored. Militia (equivalent to today’s National Guard) were eventually called to respond and led a hunt for the mob, including Shays, until they were finally captured on February 4, 1787.

Shays, and those who followed him, were formally charged with treason. John Hancock, however, had just been elected Governor, and with his reputation, having been the first signer of the Declaration of Independence, was able to reach a compromise in which the accused would be banned from serving on juries, voting or exercise public functions. , but not subject to extended prison terms or death.

Subsequently, Hancock also introduced codes to the legislature that would impose a moratorium on evictions and reduce taxes on the rural population. All defendants were pardoned later that summer and allowed to leave detention peacefully.

These incidents, known as the Shays Rebellion, were symptomatic of deep economic and philosophical divisions within our country at the time, which threatened to shake the foundations of democracy, for which both sides had fought . Fortunately, they could be resolved, to the benefit of all, and freedom, instead of anarchy, prevailed.

Let us remember this as we recognize Freedom Day in 2022 and the 235th anniversary of the Shays Rebellion.

MARK-TO-MARKET: Economic growth is surprising, but what does the future hold? | Business & Economy