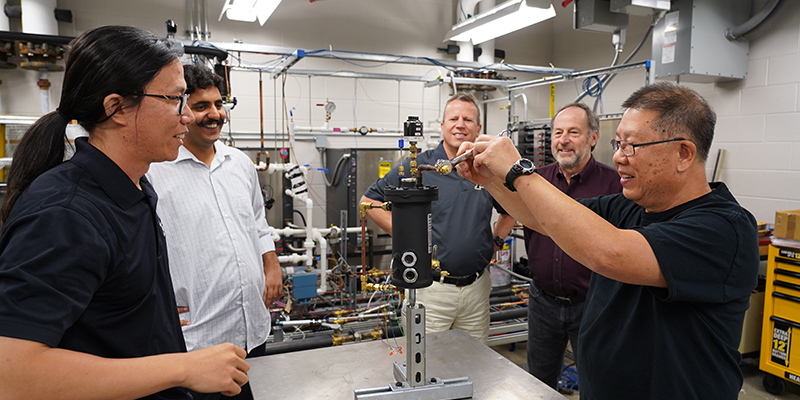 Lack of oil is one of the main reasons for compressor failure in HVAC&R systems. The Purdue Smart Accumulator OCR Sensor could provide a better idea of ​​oil flow in a system. This would solve the failure and improve the reliability of the whole system, especially the one running with variable speed compressors. The sensor would also support the efficient operation of new systems that use alternative refrigerants with low global warming potential, thereby reducing carbon footprint and increasing energy efficiency.

In 2020 Vatsal Shah, a former Ph.D. student, who graduated from the School of Mechanical Engineering in 2021, and other researchers at Purdue’s Ray W. Herrick School and Laboratories developed a methodology to monitor the Real-time OCR for HVAC&R systems. The OCR monitor provided data on the oil circulation in the system outside of the compressor and the health and functionality of the oil management system as a whole.

The monitor was shown to industry leaders, who suggested it needed improvements in its design, which limited its use beyond the lab. As a result, the group created improved second-generation surveillance technology.

“We were told that if the technology could be developed in a small format and simplified to reduce costs, it could have great market appeal,” Shah said. “A more compact product could be installed as an OCR sensor in HVAC&R equipment, providing many opportunities for active oil monitoring and management using advanced control systems.”

The second-generation smart battery from Purdue engineers performs as well as the first, but in a compact format.

“Additionally, to keep costs low and make it easier to install the technology in current and new systems, the OCR sensor has been integrated into a vacuum line accumulator,” said Parveen Dhillon, Ph.D. candidate. from the school of mechanical engineering. “This is a commonly used component in HVAC&R systems, which means no special equipment is needed to install it.”

A prototype of the second generation smart accumulator OCR sensor was tested in an oil management test rig at Herrick Laboratories. In addition to performing well in validation tests, Dhillon said, the sensor responds to industry feedback on design requirements.

“The technology developed enables OCR quantification in the vapor line without disrupting the system, unlike the sampling-based method commonly used in the liquid line, which can be tedious and time-consuming,” Dhillon said.

Future testing of the OCR monitor could include a two-stage cold climate heat pump system that is currently being developed at Purdue as part of another research project.

Dhillon and his colleagues disclosed the second-generation smart-accumulator OCR monitor to the Purdue Research Foundation’s Technology Commercialization Office, which has filed a patent application to protect intellectual property. For more information on licensing and other opportunities, contact Dhananjay Sewak at [email protected] on 2021-GROL-69502.

Prototyping and validation testing of the smart accumulator OCR sensor was supported by an award from the Trask Innovation Fund, which is managed by the Purdue Research Foundation Office of Technology Commercialization.

Purdue University is a leading public research institution that develops practical solutions to today’s toughest challenges. Ranked in each of the past five years as one of the 10 most innovative universities in the United States by US News & World Report, Purdue delivers groundbreaking research and breakthrough discoveries. Committed to hands-on, online, real-world learning, Purdue provides transformative education for all. Committed to affordability and accessibility, Purdue has frozen tuition and most fees at 2012-13 levels, allowing more students than ever to graduate debt-free. Learn how Purdue never stops in the persistent pursuit of the next giant leap at https://stories.purdue.edu.

About the Purdue Research Foundation Office of Technology Commercialization

The Purdue Research Foundation’s Office of Technology Commercialization operates one of the most comprehensive technology transfer programs among leading research universities in the United States. The services provided by this office support Purdue University’s economic development initiatives and benefit the university’s academic activities through Purdue’s marketing, licensing and protection. intellectual property. The office is located in the Convergence Center for Innovation and Collaboration in the Discovery Park District at Purdue, adjacent to the Purdue campus. In fiscal year 2021, the bureau reported 159 agreements finalized with 236 technologies signed, 394 disclosures received, and 187 U.S. patents granted. The office is managed by the Purdue Research Foundation, which received the 2019 Innovation and Economic Prosperity Universities Award for Place from the Association of Public and Land-grant Universities. In 2020, IPWatchdog Institute ranked Purdue third nationally for startup creation and in the top 20 for patents. The Purdue Research Foundation is a private, nonprofit foundation established to advance the mission of Purdue University. Contact [email protected] for more information.