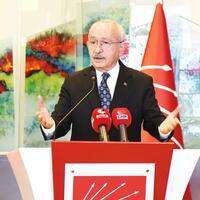 Opposition to the disclosure of common economic policies, system proposal: president of the CHP

The opposition alliance has agreed on a 23-page package of proposals for a return to a strengthened parliamentary system and is discussing compromised economic policy, the main opposition party chairman said, advising that the alliance will announce its presidential candidate after the decision for the elections is taken.

â€œA 23-page document emerged as a result of talks between representatives of six parties. It explains the shortcomings of the current presidential system and details how quickly it should be replaced by the strengthened parliamentary system. It will be made public after all presidents have approved it, â€Kemal KÄ±lÄ±Ã§daroÄŸlu, leader of the Republican People’s Party (CHP), said in a meeting with the newspaper heads of the Ankara office on December 27.

The CHP is the largest component of the National Alliance, made up of the Ä°YÄ° (Bon) Party, the Democratic Party and the Felicity Party. Although not formally members of the alliance, the Future Party and the Democracy and Progress Party (DEVA) have joined the talks.

â€œOur fundamental objective is to gain power through democratic means and to rule the country with the principle of the rule of law. We all see that this current system is dragging Turkey into disaster, â€he suggested, stressing that democracy is what all six parties have in common.

The leaders of the opposition alliance have developed a very good understanding and direct dialogue, he said, noting that although each of these parties has a different opinion on the economy, they are now working on an agenda. compromise.

â€œWe have found that our views are not contradictory. They are rather complementary to each other. There are things we differ on, but we have the wisdom to come together and discuss them openly, â€he said.

11 questions to the government on the economy

KÄ±lÄ±Ã§daroÄŸlu reiterated his criticism of the way the government is trying to run the Turkish economy and accused President Recep Tayyip ErdoÄŸan of creating the conditions for one of the biggest burglaries on the Turkish Treasury.

“What we saw was a burglary that took place in one day. It was organized by ErdoÄŸan and his collaborators. Some people benefited from it in an extraordinary way,” he said.

The CHP submits a parliamentary motion that includes 11 specific questions to investigate what really happened on the night of December 20 after ErdoÄŸan announced measures that led to a sharp drop in the value of foreign currencies.

KÄ±lÄ±Ã§daroÄŸlu argued that the Central Bank and state-owned banks that night sold $ 19.1 billion in an attempt to revalue the national currency against foreign currencies, saying: â€œIf President ErdoÄŸan rejects this figure, he should better support our motion to investigate what happened. But I think he can’t do it.

Alliance will not rush to nominate a candidate

On one issue, KÄ±lÄ±Ã§daroÄŸlu said that the opposition alliance has not yet decided who will run for the presidency, saying: â€œWe think it is still too early. We will announce our candidate when the election decision is made.

â€œWe have not yet discussed this issue. But we say our candidate has to be someone who knows how the state is to be governed. He or she must be a role model. We are not going to elect a popstar. This person must be able to keep the unity of the alliance and lead the transformation of the system, â€he added.

He denied that he and Istanbul’s mayor Ekrem Ä°mamoÄŸlu fought for the presidential race, reiterating that mayors continue to serve their constituencies intensively. On one issue, KÄ±lÄ±Ã§daroÄŸlu denied that former President Abdullah GÃ¼l could turn out to be the alliance of the opposition, saying: â€œWe never discussed this. Yes, he’s a person who knows how to run the state, but he’s not the only one.