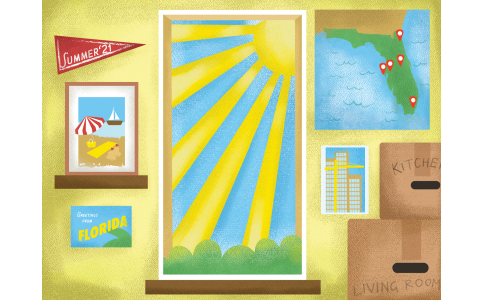 Strong population growth, declining unemployment, a slow but steady increase in the GDP of the population, and South Florida’s thriving technology and financial sector are the main drivers of economic growth in the region after the lows of the pandemic.

According to the Florida State Bureau of Workforce Statistics and Economic Research, the unemployment rate was 4.6% last October with 8,902,400 non-farm jobs, a 0.2% recovery from September and a 1.2% recovery from last year. The Miami-Miami Beach-Kendall area was at 3.8% unemployment, according to preliminary data, a change of 6.2% from a year ago.

In terms of GDP, Florida is expected to grow 2.5% in fiscal year 2019-20, but fell 4.3% in the first quarter of 2020 and 30.1% in the second quarter, according to the Florida Legislature. Office of Economic and Demographic Research, published last August. After the third quarter of 2020, Florida’s GDP rebounded 33.4%, as people returned to work, and the year ended with state GDP growth of 3.1%. .

South Florida accounted for one-third of the state’s GDP, and Miami-Dade County accounted for 15.74%, being “the hardest-hit county in the state by most measures,” according to the report.

Mark Vitner, managing director and senior economist at Wells Fargo, said Florida’s economy is rebounding very strongly. â€œThe pandemic ended the long expansion we had over the past decade, but in Florida the contraction was relatively short,â€ he said. “We saw economic activity decline for two months, it felt very strongly, but then it came back very quickly.”

The first quarter of 2021 brought Florida a 7% increase in GDP, ranking 15th in the country in terms of GDP.

“The output of the economy has recovered faster than employment because we have not reinstated all jobs in restaurants, bars and places of entertainment, in care lounges, retirement homes and daycaresâ€¦ â€, said Mr. Vitner. “Almost all of these industries employ a large number of part-time workers, and the pay is relatively low in many occupations in these industries, and they have not returned.”

â€œBut the tech industry is booming,â€ he added. â€œA lot of it has been in South Florida, but also in Tampa, St. Petersburg, Orlando, Jacksonville. We have seen a lot of financial services companies; hedge funds, private equity firms and many managers have moved.

A Florida state press release in October said the state gained 72,700 private sector business jobs during that month. Florida’s private sector employment grew 5.6%, to 411,400 jobs, in the past year.

Business services created 10,400 new jobs and the hospitality industry created 26,600 new jobs in October, according to the press release. According to the Florida Department of Economic Opportunity, there is an 11.2% increase in real estate jobs from last year.

“The financial sector is way above what it was before the pandemic, as well as the technology industries,” said Vitner. â€œWe had strong job growth in July and August, and a spectacular tourism summer, the strongest it has ever been.

Nonetheless, many people across the country have chosen to take early retirement rather than return to work after the post-pandemic era, Vitner said.

â€œThis is particularly evident in people over 55, with the stock market as strong as it has been. Many of these people have chosen to relocate to Florida and are in semi-retirement; they are looking for a next act.

Florida’s population growth is primarily due to net migration, according to a Florida Economic Overview report from the Florida Legislature Office of Economic and Demographic Research. â€œFlorida’s population growth of 387,479 between April 1, 2019 and April 1, 2020, was the largest annual increase since 2005, just before the housing market collapse and the onset of the Great Recession,â€ says the report.

“We have had, with the economic recovery, declines and then very strong recoveries in housing [market]Said Mr. Vitner. â€œApartments, especially in downtown Miami, saw vacancy rates rise during the pandemic because people didn’t want to spend a lot of money to be in a small apartment when they couldn’t get out and move. “

He is concerned with the single-family home market, he said. â€œWe’ve seen a lot of people buying properties and converting them to single-family rentals, which is restricting the supply of homes for sale. It really has an aggravating effect, because usually someone buys a house and stays there for 7 or 10 years, then sells it and moves to another house. But when those homes are converted to rental housing, it reduces the number of homes that will be recycled over time. “

“So, for now,” he concluded, “it seems stocks have consistently been half of what they were in previous cycles.”