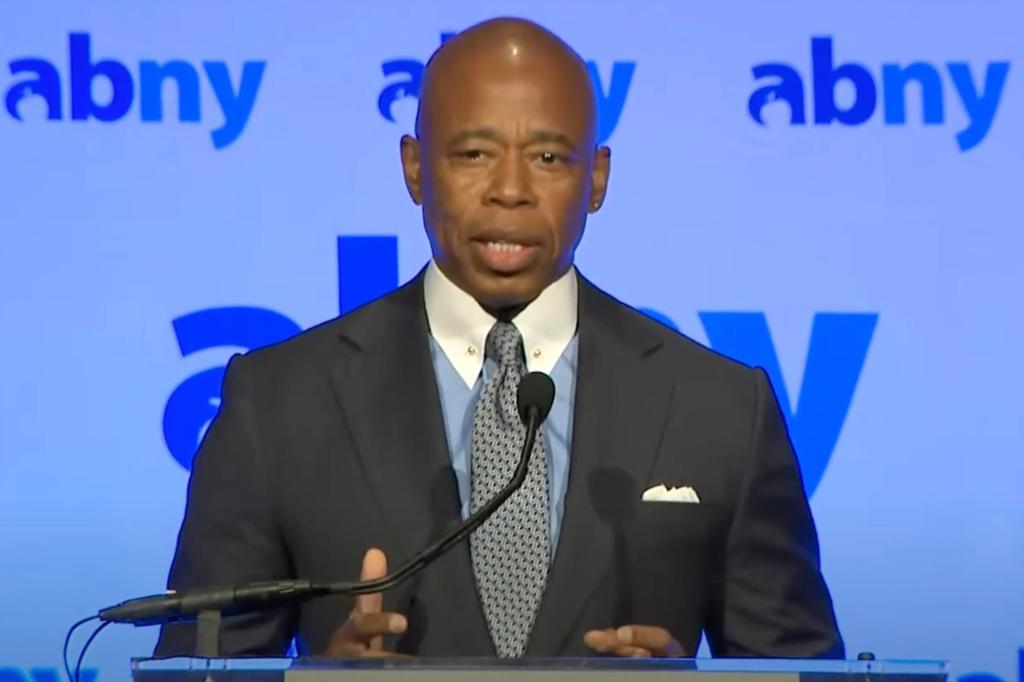 Mayor Eric Adams pledged Wednesday to “boost” New York City’s economic development by implementing a plan that loosens zoning and other regulations he says are hampering job growth and housing.

Speaking to the Association for a Better New York, Adams pledged to transform the Big Apple into an agile “city of yes” as it recovers from the COVID-19 pandemic by promoting the creation of new apartments. and giving companies more flexibility.

“In the future, we will make New York a city of yes. Yes, in my backyard, yes in my block, yes in my borough,” he told the crowd at Cipriani Wall Street. “We need to address some of the long-standing dysfunctions and contradictions in zoning and regulations.”

The mayor’s ‘City of Yes’ plan released Wednesday morning includes a citywide text amendment titled ‘Zoning for Economic Opportunity’ aimed at making it easier for businesses to use their space in ways that align with their current preferences. The measure would reduce rules on where life sciences, manufacturing and nightlife businesses are allowed to locate.

“Imagine your local bakery in a residential area with queues, eager to expand capacity and deliver to stores and markets. It would be great if they could expand into the vacant storefront next door – but under the current rules, they will have to move all of their operations to a manufacturing district,” Adams explained.

“We will now change that to a yes and let this bakery continue to grow its business in the neighborhood where it started.”

The mayor also cited banned bike repair shops in some pockets of the city as another example of unnecessary zoning regulations he will seek to eliminate.

The second city-wide text amendment to be proposed – called Zoning for Housing Opportunity – would encourage the creation of more apartments in the five boroughs by increasing the allowed density for income-targeted housing, make the conversion of less cumbersome offices in apartments and would reduce the amount of parking required for residential units.

Additionally, the “Zoning for Zero Carbon” provision would promote the charging of electric cars, the use of energy-efficient appliances and rooftop solar panels, and the electrification of buildings. Adams promised that new rules would create more than 61,000 green jobs, such as installing climate-friendly lighting and building insulation.

“We want to make sure New Yorkers have all the options they can when it comes to sustainable energy,” he said.

To pass, all three proposals will need to go through the city’s land use review process that includes the Planning Department and City Council. City Hall could not immediately disclose a timeline it planned to seek to get them approved.

The three measures, Adams said, “would energize the economy, improve economic recovery and lay the foundation for a new era in energy, housing and trade.”

During his 25-minute speech, the former Brooklyn borough president promised to “soon” release a “detailed housing plan” while saying a “key component” of it will be to ” update our zoning to boost overall housing supply” amid recently soaring rents.

“Many factors contribute to our housing crisis. One of the biggest is the inability to produce enough new housing to meet growing demand,” the mayor said.

“The result has been skyrocketing prices that make it harder for many to afford to live in our city. We want New Yorkers to stay here, put down roots and start families,” Adams said. therefore having seats for all kinds of New Yorkers, at many different prices.”

Adams also pledged to make it easier for landlords to convert vacant office space into housing and speed up the review process for projects proposed by developers.

“The overarching goal – to build more housing in the city and change the rules to allow it, starting now,” he said.

“Not everything can be a defect, no. Change is in the DNA,” the mayor added, referring to local lawmakers and residents who often oppose property development. “That’s why we have to say yes. Yes to the future, yes to our communities, yes to new businesses, yes to new homes. Yes, it is the spirit of dynamism that has propelled us through many different eras.