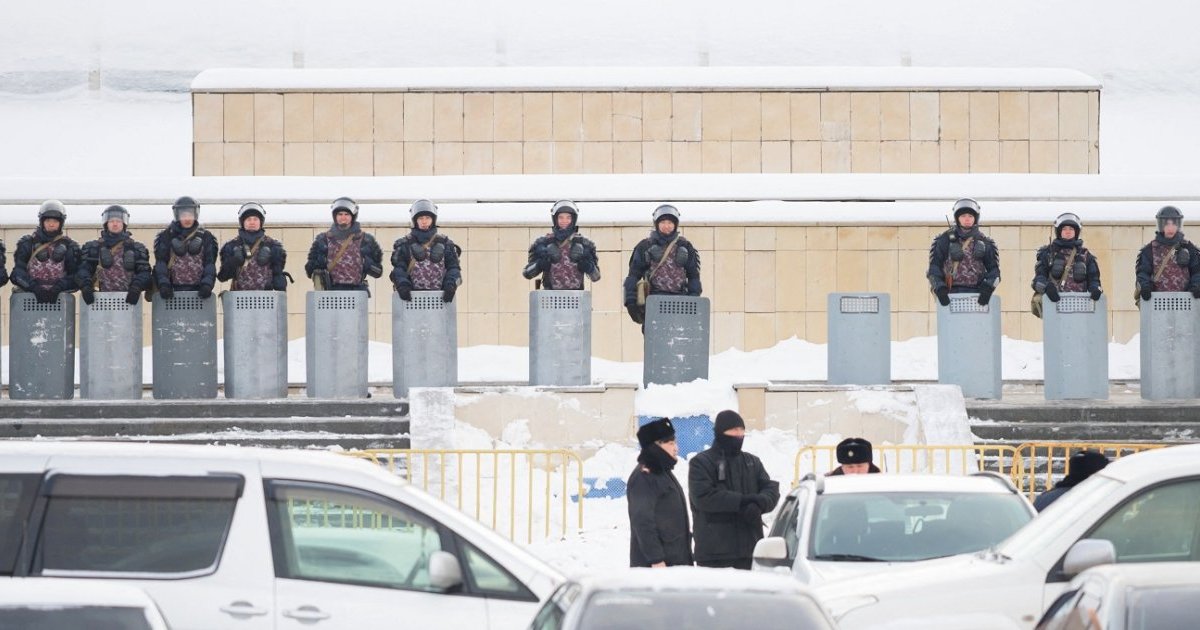 Kazakhstan: A Break in the Social Contract and the End of a Political Cycle

Since the beginning of January 2022, Kazakhstan has been in the grip of a social and political crisis of unprecedented magnitude. Popular demonstrations, armed riots and an attempted coup rocked Central Asia’s largest and wealthiest country.

After President Kasym-Jomart Tokayev was forced to temporarily resort to the Collective Security Treaty Organization (Editor’s note: CSTO, a Russian-led mutual defense alliance comprising six post-Soviet states in Eurasia) to restore order, many geopolitical analyzes followed. This should not obscure the structural causes of the events that shook a country long presented as a model of stability.

From January 2, 2022, demonstrations took place in all regions of Kazakhstan to protest against the increase in the price of liquefied natural gas following the lifting of the fixed price set by the government.

This lifting of fuel price controls, which removed one of the mechanisms for redistributing income from raw materials, caused discontent, especially as the country was already experiencing high inflation in the wake of the Covid-19 pandemic. 19 (+7.5% in 2020). , +8.4% in 2021). In particular, the daily life of the Kazakh people was already affected by rising food prices.

Popular discontent is also rooted in the extent of inequality in Kazakh society and territory, which is largely the result of liberal and authoritarian policies pursued since independence.

Alongside the political and economic elite formed around the first president, Nursultan Nazarbayev, who came to power at the end of the Soviet period, and the middle class that emerged in the big cities, large sections of society remained on the sidelines of growth.

Despite a spectacular economic boom during the 2000s and 2010s, largely based on the exploitation of underground resources (oil, gas, coal, uranium, etc.), poverty remains high. It affects both the countryside and the cities, especially the industrial cities integrated into the Soviet production system (such as Karaganda, the country’s fourth most populous city), which were the most affected by the crisis of the 1990s, which saw the Kazakhstan The GDP contracted by nearly 40% between 1991 and 1995. In concrete terms, this situation translates into living and working conditions that are still very harsh for many Kazakhs.

The clientelist presidential regime that characterizes the Kazakh political system has also fueled tensions. Democratization was one of the demands made during the demonstrations (return to the 1993 Constitution guaranteeing the rights of political organizations and trade unions; election of mayors and regional presidents; denunciation of the personality cult of Nazarbayev; consolidation of freedom information), in particular by civil society activists, while the phenomena of corruption and appropriation of wealth by those in power and those around them are denounced.

It is therefore the entire oligarchic system forged by Nazarbayev which is called into question in the popular demonstrations, whatever the geopolitical analyzes of the crisis. The social contract, which was also based on patriotic identification with the economic and political successes of the state, has largely broken down due to the slowdown in growth (-2.5% in 2020).

The protests took different forms in different cities and regions, while for the first time discontent spread across the country, starting with the city of Zhanaozen in western Kazakhstan.

Located in one of the main hydrocarbon-producing regions, the city occupies a unique place in the political and social history of the country. It is one of the centers of a region – Mangystau – whose population is known to have always shown a certain distrust of the central, tsarist, Soviet and now Kazakh authorities, as evidenced by the low vote obtained by Tokayev in 2019 during the last presidential election. election. Before that, in 2011, Zhanaozen had been the scene of major strikes in the hydrocarbons sector, the repression of which, on the occasion of the 20th anniversary of independence, officially left 17 dead.

In the western and northern regions, popular discontent was generally expressed in peaceful demonstrations marked by a strong trade union presence. However, in the cities of the east and especially of the south, from Kyzyl-Orda to Taldy-Kurgan, via Chymkent, Taraz and especially Almaty, the largest city in the country with around two million inhabitants, the demonstrations are turned into riots.

On the one hand, young men, often from underprivileged backgrounds, recently arrived in town (or still living in the surrounding villages), mainly Kazakh-speaking, and who had initially demonstrated peacefully, violently expressed their anger by looting and attacking symbols of the regime, such as the offices of the Nour Otan party (meaning the “radiant fatherland”) created by Nazarbayev.

On the other hand, more organized groups, presumably linked to criminal organisations, Islamist networks and political figures, attacked public buildings, but also the airport and the Almaty television tower, while senior members of the security, particularly within the KNB (the National Security Committee, the intelligence agency of Kazakhstan), defected.

The takeover was described by Tokayev as an “anti-terrorist operation” – an expression which allowed him to justify the imposition of a state of emergency, the unbridled repression against “bandits” and the call for the forces of peacekeeping of CSTO member countries. It was also presented as the defeat of a coup attempt.

In total, according to the authorities, the violence claimed 227 victims, including more than 200 civilians, mostly in Almaty, as well as several thousand injured. About 10,000 people were arrested, while the crackdown largely targeted civilians and activists not involved in the violence, despite the Head of State’s announcements.

This political crisis, which has left Kazakh society in a state of shock, must be seen on several levels.

On the one hand, the “January tragedy” reminds us that Kazakhstan has experienced several episodes of socio-political tension in recent years: protests against agrarian reforms in 2016, denunciation of housing and poverty problems after a tragic fire in Astana (the capital of Kazakhstan, now called Nur-Sultan) in which five children from the same family died in 2019, and inter-ethnic clashes in 2020 near the Kyrgyz border.

On the other hand, it reveals the extent of the gap between the state apparatus and a large part of the population, both politically and socially. This gap is linked, among other things, to the fact that the Kazakh political system is based less on elections than on nominations, and that it lacks, in practice, instances of representation, confrontation and deliberation.

Finally, the events of January constitute a new stage in the addressing of the succession to Nazarbayev. Alongside the popular movement, an attempt to overthrow Kasym-Jomart Tokayev seems to have been initiated by those close to the former president.

KNB chairman Karim Massimov, himself a former prime minister, reportedly asked President Tokaev to resign after the first demonstrations, before being himself dismissed and then arrested and accused of “high treason”. In other words, internal power struggles were grafted onto social discontent. And it would be reasonable to think that they are largely responsible for the explosion of violence.

After establishing himself in the institutional architecture, in particular by assuming the presidency of the Security Council, one of the major challenges for President Tokayev today is to build up a popular base, while the terms of his accession to the presidency have so far limited its legitimacy to the point that some political scientists call the Kazakh political system a “dyarchy” and consider Tokayev a “half-president”.

A “new Kazakhstan” without Nazarbayev?

The sequence that began in early January 2022 constitutes a turning point in the contemporary history of Kazakhstan. It marks the end of the political life of Nursultan Nazarbayev, who called himself a “retired” on January 18 in a short speech reaffirming his support for President Tokayev.

On January 11, in a long speech in parliament, Tokayev invokes the construction of a “new Kazakhstan” to qualify his action, in the same way as the rhetoric developed by Shavkat Mirziyoyev promotes the “new Uzbekistan” to underline the change of presidency. of the “first president” Islam Karimov, under whom he had been prime minister.

While postponing political reforms to September 2022, Tokayev announced economic and social measures, at the same time appointing a new prime minister, Alikhan Smaiylov, and a new government, a third larger than the one previously led by Askar Mamin.

He attempted to respond to social unrest by pledging to contain inflation and promising to work for the redistribution of wealth, taxing the most profitable companies and the wealthiest people. At the same time, the Kazakh president reaffirmed his attachment to the capitalist economic system while pointing the finger at several dysfunctions of the national economy (such as corruption and the oligopolistic market in Kazakhstan).

It is in this context that President Tokayev announced several highly symbolic measures aimed at those close to Nursultan Nazarbayev, considered to be the main beneficiaries of the political and economic system in place for 30 years.

The Development Bank of Kazakhstan must redefine its action after being accused of operating only for the benefit of certain people; the capital’s light metro project, considered emblematic of financial excesses, has been abandoned; the state holding company Samruk-Kazyna, which controls 60% of Kazakhstan’s GDP through its direct holdings in many companies, must reform its operations.

More directly, the recycling business of the youngest daughter of the first president was nationalized, while her sons-in-law retired from the management of several companies and institutions they occupied, although their assets were not directly threatened for the instant. Dinara Nazarbayeva and her husband Timur Kulibayev are among the wealthiest Kazakhs, with an estimated fortune of $2.9 billion. The influential nephew of the first president, Samat Abish, vice-president of the KNB, has also been removed from his post, while a wave of appointments is reshaping the state apparatus. This movement takes place at all levels of power, from the head of the presidential administration to local elected officials, from the president of the National Assembly to the mayor of Almaty.

Thirty years after independence, a new phase is beginning in Kazakhstan. It remains to be seen whether it will be reduced to a simple renewal of the personalities and interest groups that dominate the political and economic field or whether it will lead to a systemic transformation of the country.

This article has been translated from French.

Unleashing the Benefits of Digital Transformation for Palestinian Economic Growth