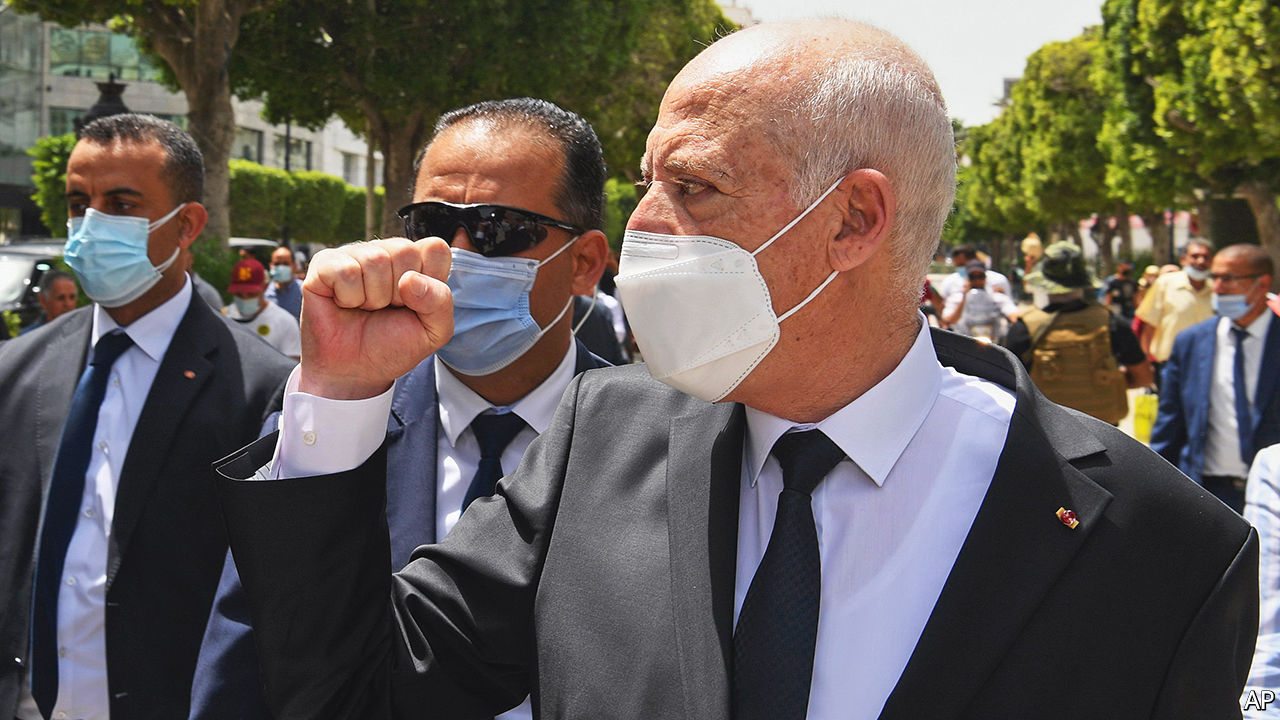 BBEFORE HE Sends a tank to bar the doors of parliament, Kais Saied was a law professor who preached allegiance to the constitution. It may seem like a contradiction, but the contradictions helped propel Mr Saied (pictured) to the Tunisian presidency in 2019. He was a patrician-mannered populist, a self-proclaimed Democrat who despised political parties and parliamentary elections. Some have dubbed him Robocop, for his conservative demeanor and views; others saw Robespierre sharpening his guillotine.

Enjoy more audio and podcasts on ios Where Android.

On September 22, Saied said he would suspend much of the constitution and rule by decree. This codifies a takeover that began in July, when he assumed emergency powers. Parliament will remain frozen and its members deprived of their salaries. At some point, Saied says, he will change the constitution and change the political system. Until then it’s less Jacobin, more Sun King.

The president’s actions have come under criticism from prominent Tunisians and some Western governments. The country’s powerful union, the UGTT, said his decree was a “threat to democracy”. There were small demonstrations in the capital, Tunis.

Perhaps the greatest threat comes from the mismatch between Mr. Saied’s actions and the aspirations of the people – and his repeating the mistakes of the lawmakers he usurped. In 2018 and 2019, the Arab Barometer, a pollster, asked citizens of 12 Arab countries to name the main characteristic of a democracy. Tunisians, more than any other group, cited the economy: 55% said a democratic government was a government that “guaranteed employment opportunities for all”. Only 10% cited free and fair elections.

It is therefore not surprising that so many Tunisians supported or tolerated Mr. Saied’s actions in July. The democratic system put in place after the 2011 revolution failed to create jobs. Growth has been less than 3% since 2012. Last year, thanks to covid-19, the economy shrank by 8%. Unemployment is officially 18%. A low dinar has contributed to high inflation (currently 6.2%).

Mr Saied’s most pressing problem is Tunisia’s fiscal mess (see graph). Public debt rose from 39% of GDP in 2010 to 88%. During the same period, the dinar lost half of its value. The country appears to be trapped in debt, with a total budget deficit of 9% of GDP and annual debt service payments of 7-9% of GDP. Transfers to faltering state-owned enterprises take another 7-8% of GDP and additional subsidies of 5%. Then there are public wages, which reached 18% of the GDP. Almost all government revenue goes to these items, leaving little for investment or social spending.

The government has started talks with the IMF in May. In exchange for $ 4 billion (10% of GDP), he proposed cutting public wages and phasing out food and energy subsidies. He was hoping to strike a deal before a bond issue slated for October. Instead, Mr. Saied suspended negotiations; the price of Tunisian bonds plunged. Some wonder if Tunisia will follow the path of Lebanon, which has failed and has seen its economy collapse.

Previous governments have paid little attention to these issues. Since the revolution, politics has been defined by an ideological struggle between Islamists and secularists. Economically, there was often little distinction between the parties. Any attempt to reduce government subsidies or wages is met with strong opposition from the government. UGTT. Half-measures do not work: liberalizing the exchange rate and imposing new taxes were enough to irritate citizens, but not to fix a broken economy.

Yet, two months after taking power, Saied has not announced much of an economic program, other than rudimentary plans to fight corruption and use the proceeds to finance development. Its strategy to reduce inflation is to ask companies to offer discounts. The economy is not his strong suit and he has received little help. On September 29, after two months of delay, he appointed a prime minister, Najla Bouden Romdhane. She is the first woman to hold this position, but also a little-known geophysics professor. We do not know how much power it will exercise.

Indeed, Mr. Saied’s plans are not very clear. He has previously spoken of his vision for democracy, with voters choosing non-partisan candidates for local councils and indirect elections for senior positions. In his speech, this would lead to lawmakers chosen on merit rather than party or ideology affiliation. Tunisians can debate the merits of this idea. One of the many problems with the old rÃ©to give, after all, was its centralized nature. Rather, local governments, which should play an important role in economic policy, were seen as a prime source of employment for loyalists. A more decentralized system could help remedy this.

But changing the system will be a long and controversial process, in a country facing a looming crisis. What exists today, after Mr Saied’s decrees, is a highly centralized regime led by an academic who has neither the expertise nor the will to solve Tunisia’s economic problems. The government froze: even trivial matters now require approval from the presidential palace. Critics of the young Tunisian democracy like to point out that it has produced ten governments in ten years, none of which are terribly effective. That’s quite true, but it should be remembered that what came before – the one man rule for 23 years – was hardly a success either. â–