Inflation Mania: 2 growth stocks that benefit from the boom in car prices

Not only is inflation soaring, it’s also the hottest topic of discussion among investors.

Rising prices for goods and services are a natural part of our economic system, but if they rise too quickly, they can disrupt consumer spending and slow the economy. The Federal Reserve generally likes the inflation rate to hover around 2% per year, but in the 12 months ended in September, it has risen 5.4%. Some economists are describing the rise as transient, meaning it is caused by short-term issues such as supply chain disruptions from the pandemic. But some fear that inflation will stay higher for longer.

Used car prices, for example, have exploded 24.4% in the past 12 months, with new cars rising sharply by 8.7% in the same period. The culprit is a shortage of crucial manufacturing components like semiconductors, which is crippling the supply of new vehicles.

here’s how Allied financial (NYSE: ALLY) and Carvana (NYSE: CVNA) have converted this boom in car prices into unprecedented stock prices. More importantly, let’s explore if this can continue.

Ally Financial is the first fully digital bank in the United States and specializes in auto loans, with 20,400 dealer relationships across the country. It currently holds over $ 101.2 billion in auto loans (which is the industry’s largest retail ledger) and derives over 62% of its revenue from this segment.

When car prices generally increase, so also increases the amount that a consumer has to borrow to buy a car. Based on the inflation data mentioned above, a used car loan would be on average 24.4% larger today than the same loan 12 months ago, and car loans from used accounted for 64% of Ally’s consumer vehicle loans in the recent third quarter; this is up from 55% in the same quarter last year.

And Ally continues to post strong gains in non-rental vehicles it re-sells, thanks in part to the general rise in used car prices. A combination of these factors is expected to result in significant profit growth compared to last year.

Ally’s current total loan portfolio of $ 101.2 billion is actually down $ 3.6 billion from 12 months ago simply because consumers cannot not get hold of new cars. This is reflected in the company’s record 3.3 million loan applications in the third quarter. The demand is clearly there, but not the supply.

However, Ally should benefit significantly if inflation persists and interest rates start to rise. This would mean that any new loans he made at record car prices would also generate higher income over time. 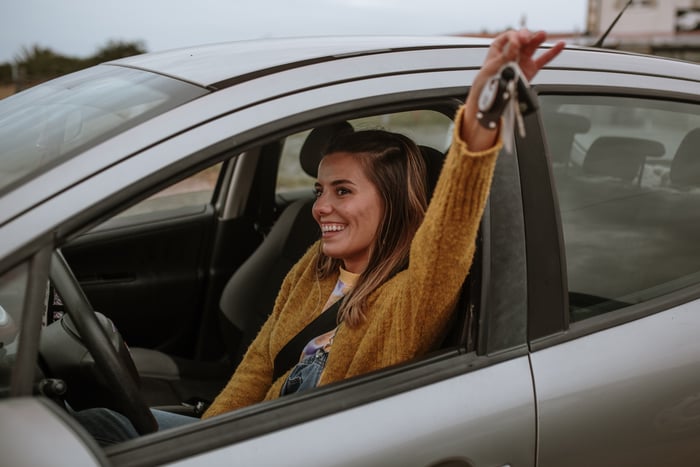 While Ally Financial finances cars, Carvana sells them. It focuses solely on used cars, and it rose through the ranks to become America’s second-largest dealership – except it has no traditional dealers.

Most of Carvana’s transactions are done online, which includes making offers on cars people would like to sell (or trade in), which are picked up and delivered if necessary by one of the company’s employees. Carvana has 28 physical outlets, but they take the form of giant vending machines where customers can schedule test drives or deliver trade-in vehicles.

The focus on used cars has seen it grow dramatically with a 24.4% price hike in the past 12 months.

The gross profit per unit is the most significant measure of this success. The company is posting net losses overall, but the increase in gross profit is a step in the right direction towards positive earnings for investors. This will only get better if car prices continue to rise, and the data suggests that it may, at least in the short term.

The Manheim Used Vehicle Value Index analyzes the sale of 5 million vehicles per year to track the evolution of car prices at auction houses. The October reading has just arrived and it hit an all-time high of 221.8, a 37% increase from October last year.

History dictates that we should not rely on used cars to grow indefinitely; in fact, their value generally decreases over time. But Carvana’s inventory continues to grow in value in the near term, and it is expected to remain strong as long as new car shortages persist, which some manufacturers believe will be fine in 2022.

10 stocks we prefer over Ally Financial
When our award-winning team of analysts have stock advice, it can pay off to listen. After all, the newsletter they’ve been running for over a decade, Motley Fool Equity Advisor, has tripled the market. *

They just revealed what they think are the top ten stocks investors can buy right now … and Ally Financial was not one of them! That’s right – they think these 10 stocks are even better buys.