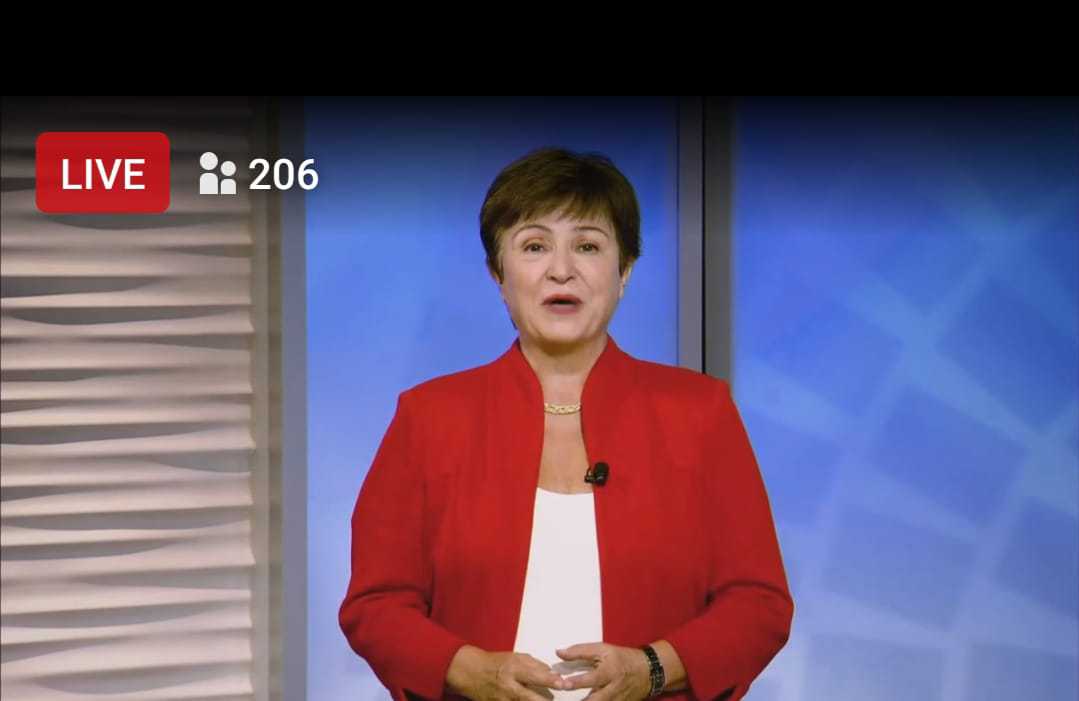 IMF Managing Director Kristalina Georgieva says the International Monetary Fund (IMF) expects global economic growth in 2021 to fall slightly below its July forecast of 6%, which will feature in the Outlook update. of the global economy next week.

His remarks came during his speech delivered virtually, at an event hosted by Bocconi University and T20. Georgieva sets the stage for the 2021 IMF Annual Meetings by presenting the outlook for the global economy and setting political priorities for recovery.

She said the world is facing a global recovery that remains “hampered” by the pandemic and its impact. the world is unable to move forward properly, it is like walking with stones in our shoes.

Georgieva said the most immediate hurdle is the “great vaccination divide” – too many countries with too little access to vaccines, leaving too many people unprotected against COVID-19.

Georgieva added that the risks and obstacles to a balanced global recovery have become even more pronounced. She focused on three of them, including divergence in economic growth, inflation and debt.

She said the United States and China remain key engines of growth, although their momentum is currently slowing. A few advanced and emerging economies continue to gain ground, including Italy and Europe more broadly.

In contrast, in many other countries growth continues to deteriorate, hampered by poor access to vaccines and limited policy response, especially in some low-income countries. And this divergence in economic fortunes is becoming more and more persistent.

She found that economic output in advanced countries is expected to return to pre-pandemic trends by 2022. Meanwhile, most emerging and developing countries need several years to recover.

Georgieva mentioned that headline inflation rates have risen rapidly in a number of countries, but again, with some more affected than others.

“While we expect price pressures to ease in most countries in 2022, in some emerging and developing economies, price pressures are expected to persist. Of particular concern about inflation is rising global food prices, up over 30% in the past year. Combined with rising energy prices, this puts additional pressure on the poorest families. More generally, the outlook for inflation remains very uncertain, ”said Georgieva.

She warned that a more sustained rise in inflation expectations could lead to a rapid rise in interest rates and sharply tightening financial conditions. This would pose a particular challenge to highly indebted emerging and developing economies.

“We estimate that global public debt has increased to almost 100% of GDP. This largely reflects the necessary fiscal response to the crisis as well as the heavy losses in production and income due to the pandemic. Here we see yet another deep divide, with some countries more affected than others, especially in the developing world, ”she said.

She further explained that many started the pandemic with very little fiscal firepower. Now they have even less room in their budgets and very limited ability to issue new debt on favorable terms. In short, they are going through tough times and are caught on the wrong side of the budget funding gap.

To remove these “stones” from our shoes and overcome these divisions and obstacles to recovery, Georgieva explained the three-point response which is, vaccinate the world, calibrate policies to country circumstances, “accelerate” the reforms needed to transform savings.

She called on richer countries to increase delivery of COVID-19 vaccines to developing countries, remove trade restrictions and close a $ 20 billion gap in subsidies needed for testing, tracing and therapeutics COVID-19.

“Failure to close the massive immunization rate gap between advanced economies and poorer countries could stall a global recovery, we could see global GDP losses reach $ 5.3 billion over the next five years, ”she warned.

“Amid the radical global changes in the years – and decades – to come, we see three priority issues for economic and financial stability: climate change, technological change and inclusion,” she said.

“The green transition also presents enormous opportunities: the switch to renewable energies, new electricity grids, energy efficiency and low carbon mobility. And if we do it with a combination of procurement policies, we could increase global GDP by around 2% this decade and create 30 million new jobs, ”Georgieva said.