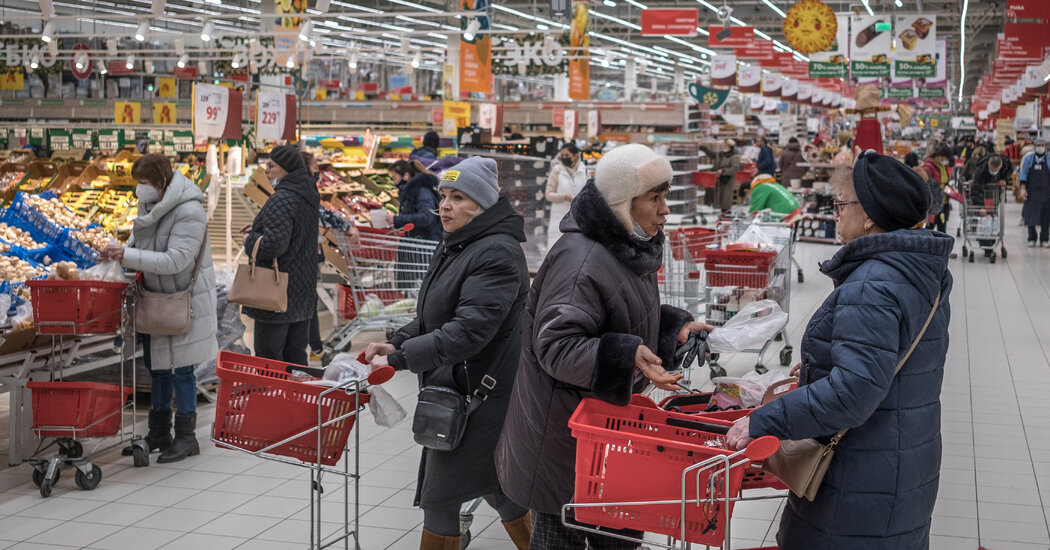 The price of oil, natural gas and other commodities soared on Monday. At the same time, the groaning weight on supply chains, still struggling due to the pandemic, increased as the United States, Europe and their allies tightened the screw on financial transactions from Russia and froze hundreds of billions of dollars of central bank assets held offshore.

Russia has long been a relatively minor player in the global economy, accounting for just 1.7% of total global output despite its huge energy exports. President Vladimir V. Putin has moved to further isolate it in recent years, building up a reservoir of foreign exchange reserves, reducing the national debt and even banning cheese and other food imports from Europe.

But while Mr Putin has ignored a list of international standards, he cannot ignore a massive, modern financial system that is largely controlled by governments and bankers outside his country. He mobilized tens of thousands of his soldiers and, in response, the Allied governments mobilized their vast financial power.

Now, “it’s a bet between a financial clock and a military clock, to vaporize resources to fight a war,” said Julia Friedlander, director of the Economic Statecraft Initiative at the Atlantic Council.

Together, the invasion and the sanctions inject a huge dose of uncertainty and volatility into economic decision-making, increasing risk to the global outlook.

The sanctions were designed to avoid disrupting essential energy exports, which Europe, in particular, depends on to heat homes, power factories and fill gas tanks. This helped to mitigate, but did not erase, a spike in energy prices caused by war and concerns over disruptions in oil and gas flows.

Concerns about shortages have also pushed up the price of some grains and metals, which would inflict higher costs on consumers and businesses. Russia and Ukraine are also major exporters of wheat and corn, as well as essential metals, such as palladium, aluminum and nickel, which are used in everything from cellphones to automobiles.

“We’re going to see skyrocketing rates for ocean and air,” said Glenn Koepke, general manager of network collaboration at FourKites, a supply chain consultancy in Chicago. He warned that sea rates could double or triple from $10,000 per container to $30,000 per container, and air freight costs are expected to rise further.

Russia has closed its airspace to 36 countries, meaning seaplanes will have to divert to circuitous routes, causing them to spend more on fuel and perhaps encouraging them to downsize their loads.

“We’re also going to see more product shortages,” Koepke said. Although the season is slower now, he said, “companies are ramping up summer volume, and that’s going to have a major impact on our supply chain.”

In a flurry of updates on Monday, several Wall Street analysts and economists admitted they had underestimated the extent of Russia’s invasion of Ukraine and the international response. With events accumulating rapidly, assessments of the potential economic fallout ranged from mild to severe.

Inflation was already a concern, reaching its highest level in the United States since the 1980s. Now questions about how much inflation has risen – and how the Federal Reserve and others will react central banks – hovered over each scenario.

“The Fed is in a box, inflation is running at 7.5%, but they know if they raise interest rates it will drive markets down,” said Desmond Lachman, senior researcher at the American Enterprise Institute. “Political choices are not good, so I don’t see how this has a happy outcome.”

Others were more cautious about the ripple effects given the isolation of the Russian economy.

Adam Posen, president of the Peterson Institute for International Economics, said there were thorny questions, particularly in Europe, about what the conflict would mean for inflation – and if he posed the prospect of stagflation, in which economic growth slows and prices rise rapidly.

But overall, he said, “damage will likely be minimal.”

This does not mean that there will not be severe pain in places. Mr. Posen noted that a handful of banks in Europe could suffer from their exposures to the Russian financial system and businesses in Eastern Europe could lose access to money in the country.

Thousands of people fleeing Ukraine are also flocking to neighboring countries such as Poland, Moldova and Romania, which could increase their costs.

The Turkish economy, already in difficulty, is likely to suffer. Oxford Economics lowered its annual growth forecast for Turkey by 0.4 percentage point to 2.1% due to rising energy prices, financial market turmoil and a decline in tourism.

The Russian Attack on Ukraine and the World Economy

Growing concern. Russia’s attack on Ukraine could cause skyrocketing energy and food prices and could scare off investors. The economic damage caused by supply disruptions and economic sanctions would be severe in some countries and industries and go unnoticed in others.

The cost of energy. Oil prices are already the highest since 2014, and have risen as the conflict escalated. Russia is the third largest oil producer, supplying around one in every 10 barrels the world economy consumes.

Gas supply. Europe gets almost 40% of its natural gas from Russia, and it is likely to face higher heating bills. Natural gas reserves are running low and European leaders have accused Russian President Vladimir V. Putin of cutting supplies to gain political advantage.

Shortages of essential metals. The price of palladium, used in car exhaust systems and mobile phones, has soared amid fears that Russia, the world’s biggest exporter of the metal, could be cut off from world markets. The price of nickel, another key Russian export, also rose.

Financial turmoil. Global banks are bracing for the effects of sanctions aimed at restricting Russia’s access to foreign capital and limiting its ability to process payments in dollars, euros and other trade-critical currencies. Banks are also on high alert for retaliatory cyberattacks from Russia.

In the United States, the president of the Council of Economic Advisers of the Biden administration, Cecilia Rouse, said the greatest impact on the American economy of the war was the rise in gasoline prices. “It definitely clouded the outlook,” she told a forum in Washington.

Gasoline prices are about a dollar higher than a year ago, with a national average of $3.61 per gallon, according to AAA.

Rising energy prices are hard on consumers, yet good for producers – and the US economy has both.

Other oil-producing countries will also see an increase in their income. And for Iran, which has been shut out of the global economy for years, demand for oil from other sources could help ease negotiations to lift sanctions.

In the longer term, the current conflict is likely to have effects on the future budgetary decisions of several countries. German Chancellor Olaf Scholz has announced that he will increase military spending to 2% of its economic output.

“Defense spending has fallen steadily in the post-war world,” Deutsche Bank chief executive Jim Reid wrote in a note on Monday. Now, with this shift in “the geopolitical tectonic plates,” he said, the priorities are shifting and “those levels are likely to rise.”

In Russia, the central bank and the government have taken a series of measures, including doubling key interest rates to 20% to increase the attractiveness of the rouble, prohibiting people from transferring money to accounts with abroad and by closing the stock exchange to contain the damage and reduce the risks. panic.

“What’s happening right now is we’re seeing the dismemberment of one of the largest economies on the planet,” said Carl Weinberg, chief economist at High Frequency Economics. “And from what I know of the tactics, that’s a dangerous tactic.”