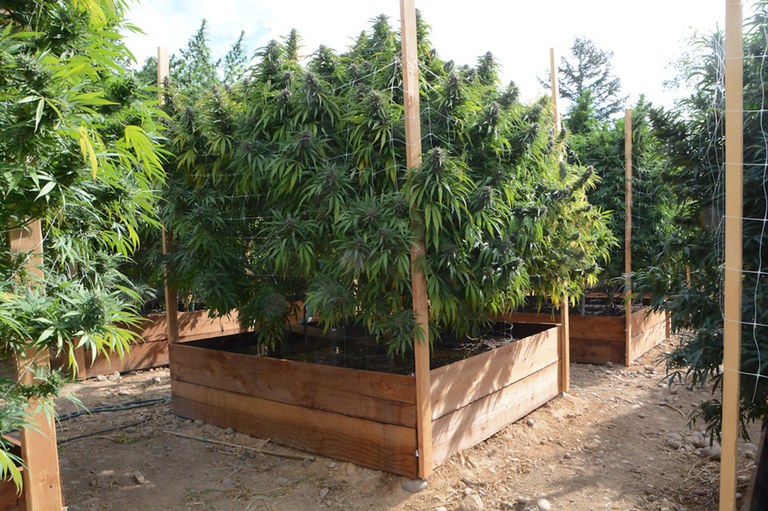 Phoebe Parker-Shames is, to her knowledge, the first doctoral student. ecology student to focus only on cannabis. Since arriving at UC Berkeley six years ago, she has been collecting data on wildlife and the cannabis industry in southern Oregon, where she is from, focusing on the farms that operate under the shadow of federal prohibition. The legal status of the plant has long made it difficult for researchers to assess the impact of the impacts of cannabis cultivation, and Parker-Shames is the first to collect data on the impact of cannabis cultivation patterns and practices. industry on the wildlife of the region.

In March, she published a landscape study of cannabis farms in Josephine County, Oregon. The first study to seriously examine the scope of the growing industry, it found that, at a conservative estimate, cannabis is produced on 6% of all private plots. Parker-Shames believes his mapping work and ecology research will not only help cannabis growers, but also their communities, who are struggling with industry compromises. “For the first time, there is an opportunity for communities to openly discuss what cannabis means to them, their local economies and the environment,” she wrote in her recent report, of the growing demand for cannabis. water to impacts on local wildlife. But the industry remains opaque and conclusive answers to key questions are hard to come by.

Recently, High Country News spoke with Parker-Shames about the role of science in policy-making and what could best help Western communities navigating a “green rush” for the first time. This conversation has been edited for length and clarity.

News from the High Country: The cannabis industry has been banned for generations. In some western counties licensed cannabis cultivation is legal, in others it is not. What was your research experience like under prohibition?

Phoebe Parker-Shames: There were logistical questions like, “Am I even going to be able to do this job at all? Then there were more barriers to everyday research—and barriers to the kind of research I wanted to do—because it was a federally illicit substance. Most students, when they step in to study an industry or system, have decades of research and previous study to draw upon. I don’t have any of that for cannabis. That makes it really difficult, and that’s part of why I’m limited in the kinds of conclusions I can draw as a scientist. I have to do the baselines myself.

HCN: Given climate change and the aridification of the West, many of our readers associate illicit cannabis with a growing demand for scarce water and possible environmental damage. What makes it difficult to draw such conclusions about the industry?

PPS: The very first thing I have to point out is that there is no standard cannabis farm. This makes research on the impacts of cannabis extremely difficult. I don’t think I realized how difficult it would be until I started, but you have huge variations in size. From four factories to thousands: this is an impossible range to draw ecological conclusions on the general impacts. Then you have things like differences in practice. Some people use hoop, others grow in original soil, and most people grow in bags. The use of fences is ubiquitous, but also inconsistent as to the permeability of the fences to local wildlife. Some people use intensive irrigation systems, some don’t. Some build vegetation that might otherwise be wildlife habitat, clear it, and form their farm there. Some people come to places that have already been developed for agriculture. It continues.

This is an incredibly difficult question to answer. It can range from being perfectly compatible with local flora and fauna, to being extremely detrimental to air, water, wildlife and people. I’ve focused my work on how we keep it “more sustainable” and get people away from large scale, very high industrial input with lots of disruption.

HCN: What are you and other scientists still unable to study?

PPS: I would like to study the so-called “cartel” farms on public lands. We only have access to researchers who are in partnership with law enforcement and who will study them after a bankruptcy. Polls and questions to farmers don’t end up reaching this community either. I think it’s important because they’re in that real research vacuum. We don’t know how many there are, we don’t know what their most common farming practices are, and we don’t know what they think about it or where they get their information on how to farm.

Because of this, they become the boogeyman. Everyone says it’s the scariest and worst form of cannabis. Probably, but I don’t know; they are only investigated after being arrested, which is not the same as investigating an active farm. It is also not possible to interview someone while they are arrested. It’s a whole population of farmers about whom I would like to know more.

HCN: You write that your research is a tool to inform communities in making decisions about how and where cannabis is grown. What kinds of trade-offs do communities face?

PPS: For a long time, many rural communities have depended on cannabis for their livelihood, and at this point it’s really mainstream. So you have fundamental trade-offs, especially in a place like Josephine County, Oregon, where the cannabis industry is critical to the county’s functioning. It is deeply embedded in the economic system.

If you’re not comfortable seeing the economic or ecological impacts of this industry, or if your knee-jerk reaction is, “I don’t like what’s going on with this industry, and I’d like it to go away then you have to recognize that there are economic trade-offs. I got into this work precisely because I care about these communities. I would rather we think about the ways we cultivate, rather than whether we cultivate or not. If you wanted to enforce every person who farms illegally, that proportion of the county’s entire population, we would be living in a police state. You cannot regulate something that is illegal.

I would rather we think about the ways we cultivate, rather than whether we cultivate or not.

HCN: Western cannabis growers are becoming increasingly visible, as are the impacts of an increasingly industrialized cannabis cultivation model. Many readers are experiencing this “green rush” for the first time. Can you highlight strategies for communities, their governments and farmers to effectively mitigate negative impacts on ecosystems?

PPS: One of the essential steps is to increase the dialogue between policy makers and regulators and those affected. Too often, when we think about who our community is and who participates in these regulations, we exclude certain cannabis producers because they operate in an illegal space.

In my mapping work – a conservative estimate from 2016 – we found that cannabis was grown on 6% of all private plots. This is a huge proportion of the land owned in the whole county. Even now most of them are probably not legal. If you want to make recommendations for how people grow — if you want to encourage them to use the most sustainable, or at least the least harmful practices — you’re going to run into obstacles if they grow illegally. So really a more effective way to change that is to get them into the legal market and then make policies about how you want them to grow and where you want them to grow – but not “don’t not grow”.

I have been studying cannabis and ecological outcomes in Josephine County for five years. There is no quick and easy way to find out which one has the most harmful effects. I’m sure law enforcement doesn’t have access to that information either.

HCN: As a scientist studying the agriculture and ecology of cannabis, what question are you most concerned about right now?

PPS: We know the political landscape is a bit chaotic. But where do we go from here? I have these recommendations about policy makers engaging with farmers and having community discussions where we think about trade-offs, but I don’t know how to get people to sit down and do it.

Theo Whitcomb is a writing intern at High Country News. We welcome letters from readers. send him a [email protected] or send a letter to the editor. See our Letters to Editor Policy.