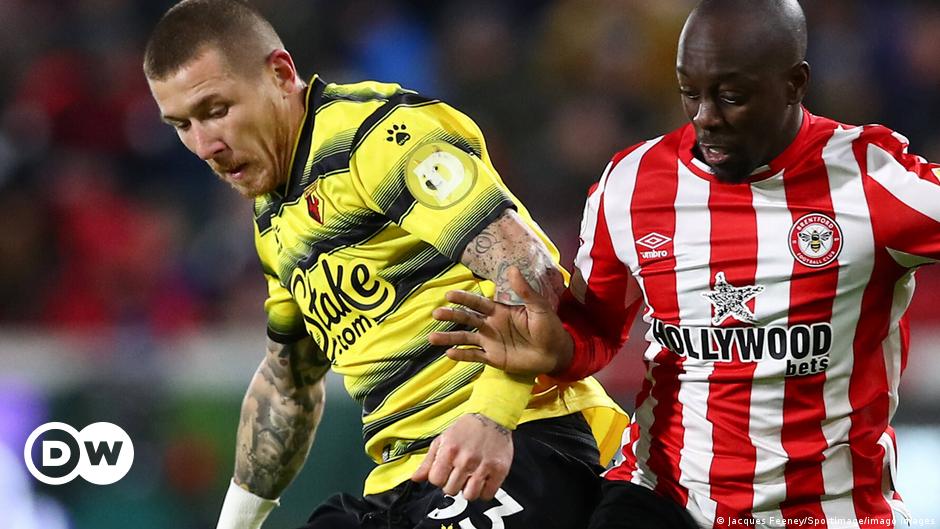 Last week, the governing body of European football. UEFA announced a sponsorship deal with Socios.com, a cryptocurrency company that sells “fan tokens” that can only be purchased through its own blockchain called Chiliz.

Socios Fan Tokens are digital assets that fluctuate in value, like any cryptocurrency. Fan Token owners receive benefits and can sometimes vote on minor club issues.

Football Supporters Europe said they were “appalled” by the UEFA deal. “It is an incomprehensible decision at a time when football needs protection from cryptomercenaries,” he said in a statement.

This is part of a trend that has seen various cryptocurrency companies and platforms invest heavily in professional football over the past couple of years.

Seventeen of England’s 20 Premier League clubs have at least one commercial deal with a cryptocurrency company, with six, including Arsenal and Manchester City, having already signed with Socios.

Some, like Watford and Southampton, wear cryptocurrencies as the main sponsor on their shirts. Watford also bears the Dogecoin logo – a “joke” cryptocurrency associated with Elon Musk – as the shirt sleeve sponsor.

Socios has deals with clubs and leagues across Europe and South America, while several other companies in the cryptocurrency industry have major trade deals like Turkey, Italy and Turkey. Argentina.

Another part of football’s growing relationship with cryptocurrency is the NFT (non-fungible token) sector, with clubs and domestic leagues developing their own digital assets – such as images or videos – to buy and sell. Several high-profile footballers, including Brazilian star Neymar, have also started to heavily promote the assets (see tweet below).

The cryptofootball boom has raised alarm bells given broader concerns about the risks the largely unregulated sector poses to financial stability. Last week, a body that makes financial recommendations to the G20 said rules covering the digital asset market needed to be enacted urgently.

Martin Calladine, investigative journalist and author of “The Ugly Game,” told DW he believes “a perfect storm” led to football’s adoption of crypto, with the pandemic fueling both a dramatic increase in cryptotrading (the global market value of the crypto industry has increased by more than 500% in the last two years) and a funding crisis in professional football.

He believes the main purpose of so-called “fan engagement” services offered by companies like Socios is to encourage people to buy the company’s cryptocurrency.

“It is perfectly obvious that the majority of these chips are not held by club supporters,” he said. “And even when they buy them, it’s not because they want to express loyalty or a sense of commitment. They buy them because there’s an opportunity to make a profit.”

“Be more than a fan” is Socios’ motto. It is estimated that up to $400 million of their fan tokens have already been traded

Calladine says the fact that anyone can buy a club’s chips, not just fans of that club, suggests it’s not a meaningful fan engagement tool. A recent first-time token sale for Premier League club Crystal Palace showed that over 90% of people who bought tokens had already purchased tokens from other clubs.

He also points out that polls that token owners can vote on largely focus on meaningless questions and have low turnouts.

Socio CEO Alexandre Dreyfus insists the company’s tokens are for fan engagement rather than investment.

“A fan who wants to vote will never trade and most of them will never trade,” he recently told the Sportspro StreamTime podcast. “You have fans who bought at 2€ [$2,3] and resell when it’s 10€ but… who can blame them?”

Calladine says the speed and development of the Socios brand has been “remarkable”. Yet there are concerns about the commercial bona fides of many other companies entering the field.

In November, Manchester City announced a partnership with a company called 3Key, described in press releases as a “DeFi-centric crypto company”. Just two days later, Man City put the deal on ice after research by Calladine and others found little evidence to suggest the company or the people supposed to run it actually existed.

Around the same time, Barcelona canceled a deal with NFT company Ownix ​​after the club discovered executives from the company were facing charges of sexual assault and fraud.

Critics like Calladine believe there is a real risk that ordinary fans will lose significant sums by investing in cryptocurrency through its association with football. He says demand for the tokens is particularly strong in soccer-dominated places like Brazil and Turkey, where there are also considerable economic problems.

“It only exists to suck people’s money, using football as a way to give it some credibility,” he says of the fan token model.

English club Arsenal recently had two ad campaigns for fan tokens banned by the UK’s advertising regulator, as it said the club was “taking advantage of consumer inexperience or credulity, trivializing crypto investments -assets, misleading consumers about investment risk and not specifying that the “token” was a crypto asset.”

Calladine hopes a growing sense of urgency around the issue could lead to a regulatory crackdown. However, he points to English football’s existing deep business relationship with gambling companies and other contentious issues like the recent Saudi takeover of Newcastle United as examples of how the industry tends to offload moral responsibility once the money is at stake.

“It’s a heavenly marriage between the amorality and money lust of football and the lucky ones of the crypto world,” he said. “You can see how well they dance together.”

“Vedomosti”: The Ministry of Economic Development of the Russian Federation has proposed to lower the forecast for the GDP growth rate to 2.8% in 2022