Thailand’s economy is expected to post a weak recovery of 1.9% in 2021 – the lowest rate among major Southeast Asian countries – according to a survey by the Japan Center for Economic Research and the Nikkei in June . The quarterly consensus brings together perspectives from economists and analysts in India and the five largest economies of the Association of Southeast Asian Nations – Indonesia, Malaysia, the Philippines, Singapore and the Thailand.

Compared to 2020, a positive recovery in economic growth is expected for the six countries surveyed, which saw their gross domestic product decline last year as the coronavirus epidemic ravaged the global economy. However, many economists believe that a resurgence of COVID-19 infections will hold back economic growth in some countries this year.

Forecast for Thailand’s economic growth in 2021 is 1.9%, down 0.7 percentage points from the previous survey in March and the lowest rate among the six countries surveyed.

The main reason for the downgrade lies in the kingdom’s struggle to contain its third wave of COVID-19 infections. Thailand faces a severe shortage of hospital beds, and despite months of successful containment, new daily infections now range between 4,000 and 6,000.

Lalita Thienprasiddhi of the Bangkok-based Kasikorn Research Center said Thailand’s economy faced uncertainty over the surge in infections. “Due to the new epidemic, arrivals of foreign tourists could be around 0.25 million to 1.2 million this year,” she said.

The tourism industry is crucial to the Thai economy, accounting for around 20% of gross domestic product in 2019 thanks to 39.9 million foreign tourists.

In an effort to save its economy, Thailand last week launched its “sandbox” program – a quarantine-free tourism experiment that opened up the island of Phuket to vaccinated foreign tourists. The government aims to use the campaign as a model to revive its tourism sector, but concerns remain about the risks of further COVID outbreaks.

Malaysia is another country struggling with a brutal third wave of infections. The JCER survey revealed a downward revision of 1.2 points in its growth rate to 4.1%. The country recorded the largest decline in growth forecasts among the five ASEAN countries.

As infections continued to skyrocket, the Malaysian government introduced a nationwide lockdown in June. The measure has since been extended with tighter restrictions on the movement of people and businesses, including in the country’s capital, Kuala Lumpur.

“We believe that the service sector, and in particular the retail sector, will remain under pressure in the short term, as consumer activities could be [hindered] through increased mobility restrictions and the closure of non-essential stores, ”said Wan Suhaimie, head of economic research at Kenanga Investment Bank. 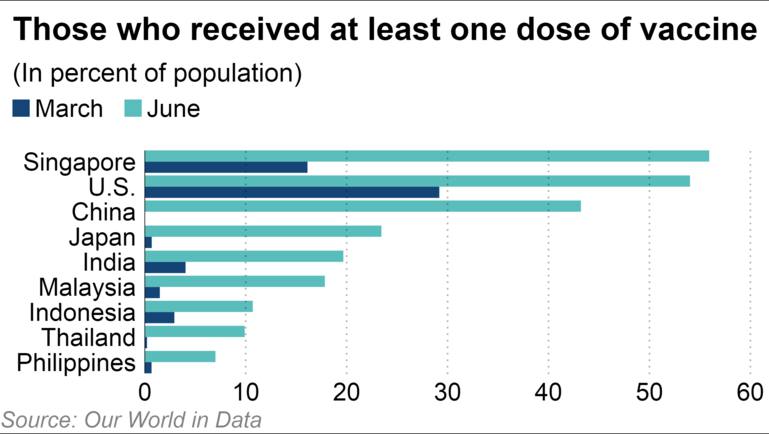 The severe downgrade was caused by the massive COVID crisis in the country. Infections started to spiral out of control in April and at one point India recorded a daily death toll of over 6,000 – the highest among Asian countries – as the delta variant wreaked havoc on its system. health.

Dharmakirti Joshi, chief economist at Indian rating agency CRISIL, notes that “the second wave of COVID-19 has disrupted India’s economic recovery, as the huge increase in the number of cases has forced states to withdraw. close, which affected the confidence of consumers and businesses ”.

“The pace of economic recovery will also depend on the pace of vaccination in the coming months,” he added. “We expect 70% of India’s adult population to be vaccinated by December in our baseline scenario, [after] that the recovery can strengthen. “

Tirthankar Patnaik, chief economist at India’s National Stock Exchange, said “rural demand, which was relatively resilient last year, could be hit this time around given the very negative impact of the second wave on the rural sector “.

The survey also showed that economists forecast a 4.3% growth rate for 2021 for the Philippines, down 0.9 percentage points from the previous consensus, and 4.1% for Indonesia. , up 0.2 percentage point.

Singapore’s growth forecast looks most optimistic at 6.9%, an upward revision of 0.8 percentage point from the March survey, as a rebound in demand for goods boosts exports . Daily COVID infections have also remained fairly low as inoculations accelerate. More than half of the country’s population received at least one dose of the vaccine by the end of June. 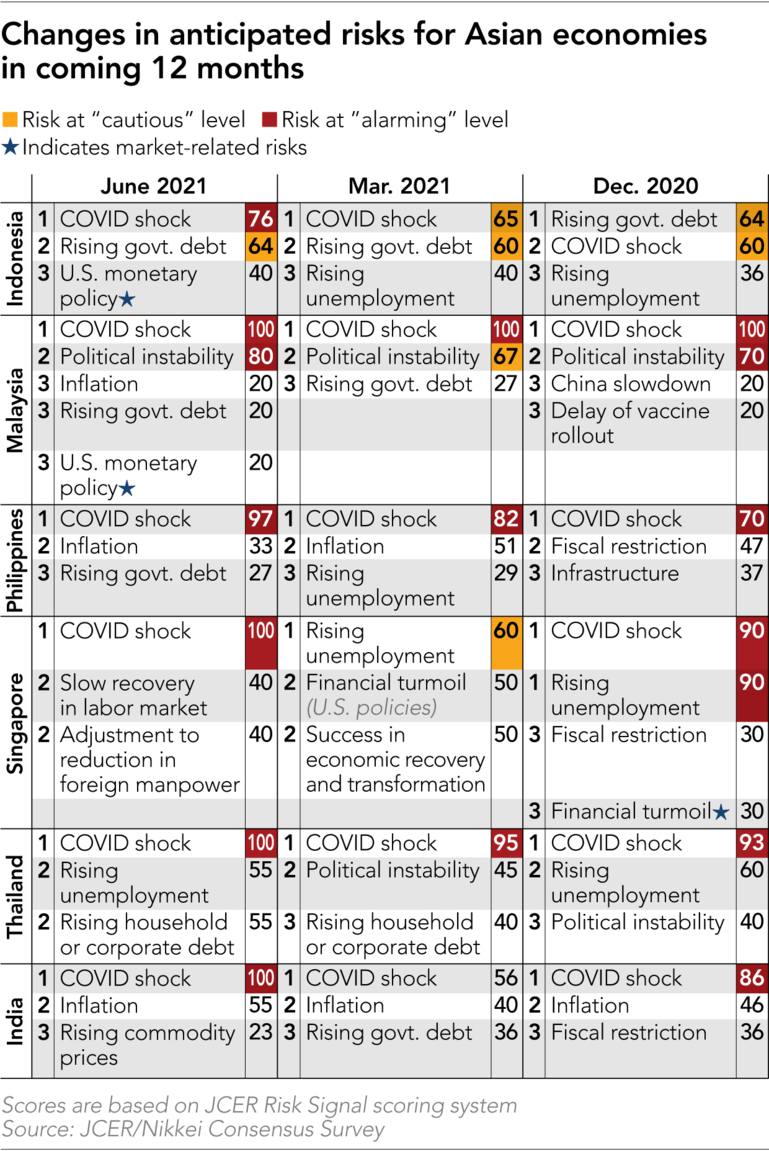 “Growth prospects continue to improve with signs that the effects of restrictions on economic activity are becoming more predictable,” said Randolph Tan of the University of Social Sciences in Singapore. global demand for electronics is a key positive contributor to the sense of positive growth, ”he added.

Many economists agree that the spread of COVID and the contagious delta variant remains the highest risk factor for Asian countries.

Vincent Loo of KAF Research in Malaysia points out that “vaccination seems to be the only way to bring the country back to normal.” However, he notes that “vaccination is not a ‘panacea’, as mutated viral variants can reduce the effectiveness of the vaccine.”

Economists are also monitoring the impacts of US inflation and changes in monetary policy. The US Federal Reserve has indicated that it plans to make its first interest rate hike after the pandemic in 2023. Higher interest rates in the US tend to cause capital outflows from Asian emerging markets and encourage local currencies to depreciate.

In the survey, economists in Indonesia, Malaysia, the Philippines and India cited “US monetary policy” as one of the significant risks countries’ economies face over the next 12 months.

Dendi Ramdani, of Jakarta-based Bank Mandiri, said that “the possibility of reducing and [a Fed rate hike] will create external pressure on the rupee’s exchange rate due to capital outflows and the key rate in Indonesia. The higher interest rate may restrict economic recovery. “

The changing strategic imperatives of the oil and gas industry

WWF calls on UK to reduce global environmental footprint by 75%